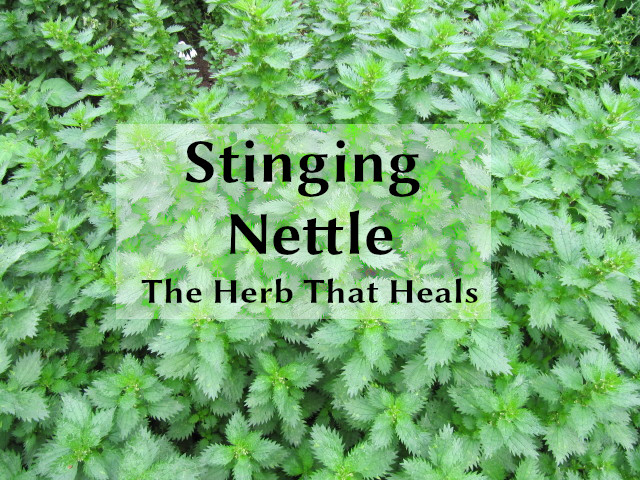 If you’ve ever wandered through a patch of stinging nettles without leg coverings you may have some misgivings about the plant’s intentions. It is not a pleasant experience, but it turns out that the effects of stinging nettle are not necessarily bad.

Some people even go out of their way to get stung by stinging nettles. And it’s not a new trend.

It’s said that Roman soldiers used to deliberately sting their legs with stinging nettles. They’d whip themselves with nettles to stimulate circulation and give relief to their tired, painful legs on long marches. It’s a practice called urtication. Apparently Romans weren’t the only ones to do this. On the other side of the globe a number of North and South American indigenous nations reportedly used stinging nettles in a similar way. In this case it was to help them stay awake when pulling guard duty. source

Using stinging nettles as a health treatment by actually stinging the skin has other surprising effects. In one case a UK man credited stinging nettles for helping him get rid of his hayfever. This story was reported in May 2019 by the Cambridge Shire Live News: “Goran Pavlovic claims he hasn’t been troubled by hayfever in three years after stinging himself.

“A few years ago,” Pavlovic said, “an old man (crazy old man according to my wife) told me to try nettles.

“Basically, as soon as the spring starts, he told me, and the first nettles sprout out, pick a bunch and sting myself with them.

“Do that once a week until the end of autumn. Apparently this would make my immune system concentrate on nettles and forget about the pollen…To my wife’s horror and the amusement of the fellow walkers in parks and forests, I soon started the “therapy”. source

“Back in the good old days,” says Dr. Duke, ” I played bass fiddle in a a five-member band. At that time, three of our band members or their relatives were using an herb known as stinging nettle to relieve arthritis pain. Although stinging nettle does cook up into a tasty vegetable, these musicians weren’t eating it. Rather, they were stinging themselves with it by grasping the plant in a gloved hand and then swatting their stiff, swollen joints. Our banjo player kept a plant in his kitchen so he could self-urticate when his arthritis flared up. The guitar player’s mother-in-law was unable to write because of arthritis in her hands, but the sting of the nettle improved that. The fiddle player’s mother soon had stinging nettle taking over her garden and said her arthritis was much improved.” source

The above type of treatment is not generally advisable as some people may not fare well with nettle rash.

I wondered if the external application of stinging nettles had been the subject of any academic studies. And if so what were the documented merits to this type of treatment.

The search I conducted on the subject turned up an interesting study published in June 2000 by the Royal Society of Medicine (UK). A randomized controlled study found that one week’s treatment with nettle sting to an achy thumb joint resulted in significant pain relief compared to a placebo. source

Further reading and research on the subject revealed that fortunately you don’t need to sting yourself in order to benefit from this amazing plant.

Stinging nettles offer many benefits even when they aren’t stinging a person.

In her book, Stinging Nettles — Queen of Herbs, herbalist Mary Ann Mehegan recounts the story of how her mother found relief from arthritic pain by using stinging nettles but getting stung was not necessary.

Having studied herbalism Mary Ann was familiar with the healing properties of stinging nettles. When her mother complained of an achy knee Mary Ann suggested applying her new found knowledge to see if it might help. Mary Ann found a patch of wild nettles growing beside a nearby forest. She cut  some of the nettles and brought them home. After making a poultice she applied the nettles to her mother’s knee with a warm damp  cloth, occasionally applying pressure. After an hour of this treatment her mother found that the pain was gone. Both mother and daughter were surprised that it had worked so fast. Even more wonderful is that her mother reported that the joint pain in that knee never returned.

Some plants that have traditionally been used to treat specific ailments have proven difficult to study. Scientists have not clearly identified how echinacea or ginkgo biloba provide some of the results attested to by anecdotal evidence. This difficulty is often due to the fact that studying the health benefits usually means isolating a particular phytochemical from the plant and understanding how it acts on human cells. When the benefits are not the result of one or two phytochemicals it becomes extremely difficult to isolate results. Herbal healing can be the result of the synergistic result of multiple phytochemicals acting on the body, perhaps on a number of different parts of the body.

Fortunately stinging nettles have yielded up some of their secrets in more than one scientific study.

We have the scientific proof, in addition to anecdotal evidence, that nettles are indeed a herb which endows many benefits. Research papers which describe the action of stinging nettles on the body give us an understanding as to why nettles are such an amazing healing herb.

If you are interested in reading further about this then check out a study published in 2017 which sheds light on the chemical composition and immuno-modulatory effects of urtica dioica L. (Stinging Nettle). It can be found in Phytotherapy Research Volume 31, Issue 8.

Stinging nettle is an ingredient in many of our teas here at Nourishing Herbs. Not only are the benefits it yields for overall well-being abundant, it complements a number of other herbs that might be a little overpowering on their own.

One of our goals is to not only provide teas that support well-being but to make sure that the teas are rich in flavour and enjoyable. Ideally without the need for any sweetening.

Nettle tea on its own has a herbaceous taste that some compare to an earthy, sweet version of seaweed.

It complements many other herbs and pairs well with a range of different plants. If you search for Nettle on our site you will find that we combine it with many different herbs and spices including Black Pepper, Burdock, Cayenne, Cinnamon, Cloves, Fenugreek, Ginger, Ginkgo, Hibiscus, Horsetail, Lavender, Lemon Balm, Lemon Myrtle, Lemongrass, Liquorice, Red Clover, Rooibos, Rose petals, Rosehips, Rosemary and the list goes on.

Nettle Use Around the World

Stinging nettles have long been used as a tea to treat pain and sore joints. The Arthritis Foundation suggests that nettle tea is useful in reducing the inflammation and pain associated with osteoarthritis.

In Lithuanian folk medicine, nettle made from the entire plant was used to treat atrophy.

Nettles were used in American medicine which made use of botanical remedies in the latter half of the 19th and first half of the 20th centuries. Preparations from nettle leaf and root were used as a blood purifier, styptic, stimulating tonic and diuretic to treat diarrhoea, dysentery, discharges, chronic diseases of the colon and chronic skin eruptions . Syrup made from the juice of root or leaves was said to relieve bronchial and asthmatic troubles .

In African medicine, nettle root is used to treat diarrhoea and as an anthelmintic to expel intestinal worms. Nettle root was first used in urinary tract disorders in the 1950s.

The German “Commission E” approved the use of nettle root for problems in urination in benign prostatic adenoma stages I and II .

The British Herbal Pharmacopoeia reported prostatic action (BHP 1996). According to the wording of the British Herbal Compendium, nettle root is suitable for the symptomatic treatment of micturition disorders in the early stages of benign prostatic hyperplasia (BPH) .

The French Herbal Remedies Notice to Applicants for Marketing Authorization allows two uses of nettle root: as an adjunctive treatment for the bladder outlet obstruction symptoms of prostatic origin, and to enhance the renal elimination of water .

ESCOP indicates its use for symptomatic treatment of micturition disorders (nocturia, pollakisuria, dysuria, urine retention) in BPH at stages I and II . In the USA, it is used similarly, although as a dietary supplement. source

As always we advise consulting your health care physician before undergoing any treatment. Care should especially be taken if you are taking blood thinners, blood pressure medication, diuretics (water pills), diabetes medication, or lithium. The information given on this site is of a general nature and does not take into account your personal circumstances and should not be taken as medical advice.