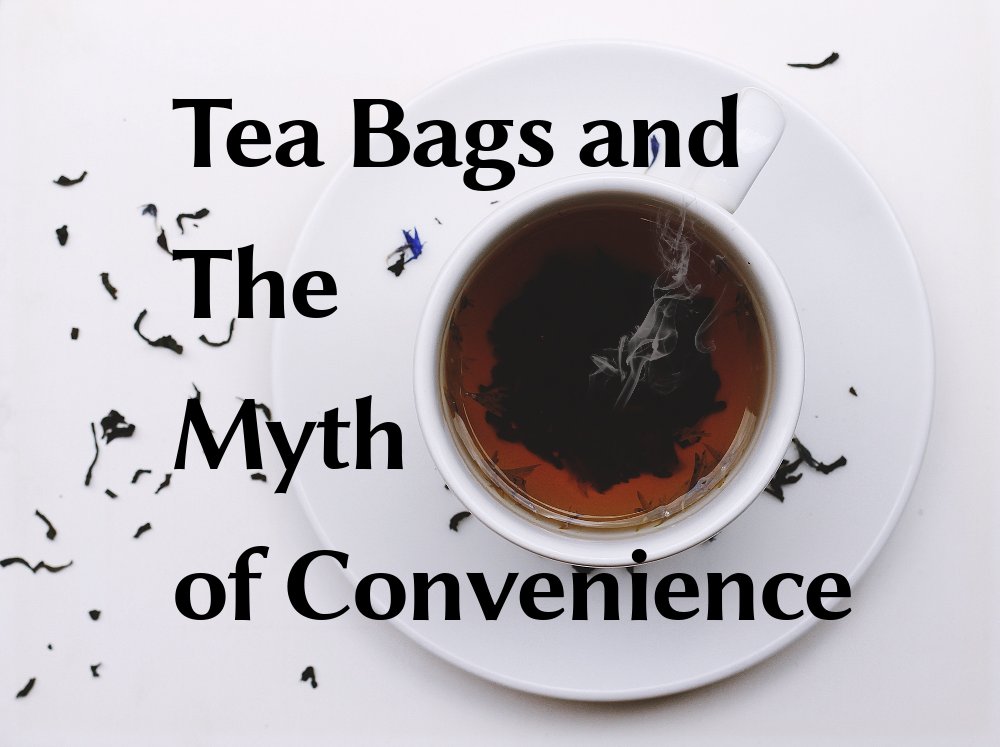 Given a choice between using a tea bag or not I will choose to not use a tea bag.

It’s one of those things I find I can do without.

As a matter of fact, I prefer it. Much of the time I don’t even use an infuser. I simply toss the loose leaf tea or herbs in my mug and pour in the hot water. Call me uncivilised, but it tastes great and I think it is no less convenient.

Having opted for no tea bag for years now I have found that I can definitely taste the difference. If ever I am offered tea that has been brewed using a tea bag I can tell the difference immediately. I find that tea bags themselves not only affect the flavour of the tea but it’s a well known fact that the tea used in teabags is often inferior in quality to loose leaf tea.

Consult any tea specialist and they will confirm that whole leaf tea produces the finest-quality tea, while fannings and dust are generally used to make the quick-brewing teas.

Guess which type is used in almost all tea bags? Tea dust and broken leaves.

The rise in use of tea bags is attributed to a coffee and tea broker by the name of Thomas Sullivan. He figured it would be a cheaper way to send out samples, ready for tasting. Prior to that he’d been sending out tea samples in small tins. Sullivan’s innovation quickly took off and he began producing tea bags for sale. In a way this “discovery” was as serendipitous as the discovery of tea itself. Chinese legend holds that tea was discovered when in the third millennium BC some leaves accidentally drifted into a bowl of hot water sitting by the Emperor’s window. As unlikely as that may be it has a theme of effortlessness and convenience. This motif is retained in the essence of tea and the ceremonies surrounding it.

In A History of Tea (2018) Laura C Martin informs us that from the beginning tea bags were problematic. The release of flavour was hampered by the lack of sufficient space for the tea leaves’ expansion. A half way decent solution was not found until 1952, when tea bags had already been in use for many years. It was then that the Lipton Tea company came up with a new patented tea bag, the “Flo-Thru”. Other solutions were derived, and various shapes of tea bag were marketed all in an attempt to solve the problem but the heart of the matter was that low quality tea would have to mostly be sold in tea bags.

As we know all too well when product decisions are made by a corporation the end result is very likely to be for the benefit of the corporation’s bottom line. Tea bags facilitate the sale of tea dust.

While many defend their use of tea bags with the argument that it is a time saving device it’s more a question of habit.

Once you experience the taste of loose whole leaf tea you’ll quickly figure out a way to ditch the tea bag. It doesn’t take any more time to make a cup of tea with loose leaves than it would with a tea bag.

The Myth of Convenience

How often have so called short cuts resulted in unforeseen problems? I could name so many examples that I may be able to claim that I have discovered a law of the universe. This law would be summed up as: There is no such thing as a true shortcut. Shortcuts on the surface can seem like a good idea. And yet the regrettable consequences of such shortcuts are all too frequent.

And even if using loose leaf tea is a minor inconvenience who’s to say that the end result isn’t even more enjoyable? Psychologist Mihaly Csikszentmihalyi conducted studies on what makes people happy. He found that we experience happiness most reliably when we experience an optimal balance between the challenge of a task and our abilities. If we have to stretch to achieve something then the enjoyment is greater than if something is made too easy.

In his thought provoking book Co-Opportunity (2010) author John Grant says that the myth of convenience is that we cannot bear frustration or effort. The reality is that for our lives to be meaningful we need to experience some struggle, not be a stranger to sacrifice, and find a way of accepting difficulty.

So ditch the tea bag and experience a taste of rewilding by enjoying a cup of loose whole leaf tea.

What do tea companies have to hide? Why they are hiding their product behind the veil of the tea bag? Maybe they don’t want you to think outside the box. Prepackaged tea places yet another obstacle between us and nature. Tea bags give the impression that food is complicated, that it is difficult to process food, that food needs special machinery in order to be useful, or at the very least civilised. But the more we as humans mess with and complicate our food the more we create new problems. The more a food is processed the less likely it is to end up on a list of food being recommended to a person that is in the process of healing. There have been a number of concerns raised about the chemicals used in the making of tea bags.

So don’t be afraid to liberate the leaf, discover richer flavours, end enjoy a closer connection to nature.